A few days after the announcement of the Xiaomi Mi 8, some journalists were able to take in hand the new Chinese smartphone. Let’s go take some look.

Few foreign journalists were present at the press conference of Xiaomi for the announcement of new Mi 8. As a reminder, the Chinese manufacturer has announced the Mi 8, Mi 8 Explorer and Mi 8 SE.

Only 01Net was present (among the tech media). A journalist was able to make a grip on the device. Unfortunately, the current software version still seems far from finalized. Indeed, the bugs are common and the performances are still picking up.

However, this grip makes it easier to understand certain changes. This is the case, for example, gesture navigation very similar to that of the iPhone.

The gestures are strictly identical to those of the iPhone X and allow, for those who wish, to get rid of the cumbersome virtual navigation bar. The animations are pleasant and the use becomes very quickly natural.

MIUI 10, the new version of the Xiaomi interface, still has many issues especially regarding the management of the notch.

We will highlight the new interfaces of MIUI 10, very complete. The difference with Android Stock is clear, as illustrated by the multi-tasking screen. Moreover, it is a good tone to emphasize a difference between the model Mi 8 and Mi 8 Explorer. Both devices have 4 sensors and transmitters (in the notch) to ensure facial recognition, but only the Mi 8 Explorer seems to be up to the iPhone with the ability to send 30,000 IR points in order to identify all the subtleties of the face to recognize. It will be necessary to see if this difference, between the two models, is noticeable every day. Finally, the fingerprint sensor is on the rear on the Mi 8, and on the front (squarely in the screen) on the Mi 8 Explorer. The Mi 8 and the Mi 8 Explorer were compared to the iPhone X:

We must also respond immediately to the allegations of having copied the iPhone X for the design. It is clear that the notch and vertical arrangement of the rear cameras are references to the Apple device, which is no secret, but the smartphone has its own identity. (…) especially for the Explorer version manages to add something different.

We also found a few snapshots of the camera on the Mi forum, here is a complete gallery.

DxOMark had the device in his hands, the test is available at this address . The conclusion is positive about the camera, it is less positive with the video function.

(…) the Mi 8 offers camera performance that stands out from the best. The Mi 8 camera is capable of ultra-fast and accurate autofocus, with excellent exposure and detail rendering in a wide range of lighting conditions. It has a good dynamic range and a telephoto option really usable with a 2x zoom of good quality, as well as an efficient simulated bokeh mode. The Mi 8 is also a solid performer in video mode – which once assembled, is a very attractive package and a good value proposition. The thestar.com.my was also able to make some photographs of the Mi 8 alongside the iPhone X, as well as the Mi 8 Explorer (and its false transparent shell).

Of course, as you have understood, it is still too early to judge this device. The final version will arrive in late June in China, it will take a few more weeks for Europe. 01net, despite the problems on the version taken in hand, remains optimistic:

As beautiful as technically advanced, the Xiaomi Mi 8 has something to seduce. Its shapes and screen promise a pleasant use while the presence of an infrared facial recognition makes him a pioneer of the Android world.

It should be noted, however, that there is little control of the foreign media. Last week’s event remains a domestic launch. Xiaomi will then prepare launches dedicated to each country.

Some videos have also been published to make us wait, they are in English and are not really good quality. 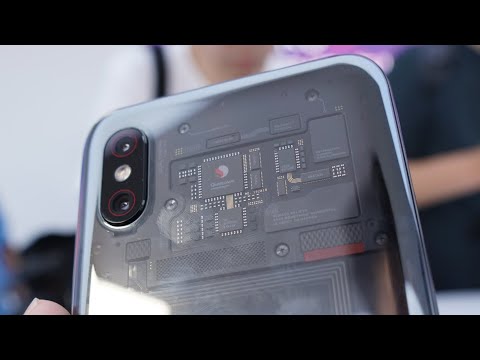 have a great day ahead!