Folding smartphones seem to be the next big trend in the market. There are already several brands that are developing a smartphone of this kind. And it is in this range that the North American enters, with the possible Motorola Moto RAZR 2019.

Now owned by Lenovo, it appears that Motorola could resurrect one of its most iconic products. In this sense, some renders of the Motorola Moto RAZR 2019 smartphone will begin to appear.

It all began in late January with the first rumors that Motorola would resurrect the RAZR line. In fact, it would be in this way that the brand would launch into the market for foldable devices.

Motorola Moto RAZR 2019 may be the smart foldable smartphone

Not long after, a patent came out that corroborated this same theory. That is, a smartphone in everything similar to mobile phones shell, but that inside only will force screen.

It was on the basis of all this information that the concept I now present came up with. In fact, we have a Motorola Moto RAZR 2019 that enchants anyone who looks at it, by Waqar Khan. 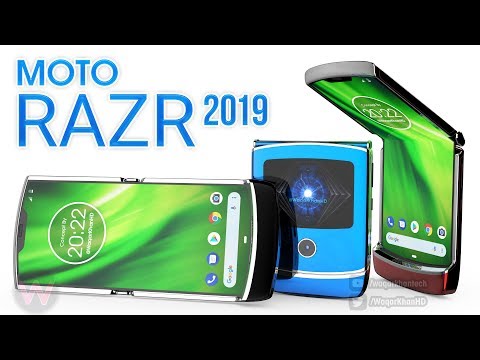 In the video you can see above we have an idealization of this Moto RAZR 2019. Therefore, we have a range of animations that depict only the imagination and desire of an enthusiast. At no point does it depict a real device.

However, we did not care that this concept becomes real. One of the concerns of this type of smartphone is its thickness. Well, this RAR 2019 presents itself with the elegance of yesteryear and the innovation of today.

Not many words you can use to describe this smartphone. Everything I say does not compare minimally to the range of images that give rise to this article. In that sense, the best you can do is watch the video in question and revel in what was conceived by this artist.