The personalization is, without a doubt, the main advantage of Android compared to other mobile platforms.

If you have a smartphone based on Google’s mobile platform, you can change almost any aspect of the user interface you’re imagining, from the launcher to the notification style.

However, one of the easiest and fastest ways to add a personal touch to your mobile phone’s main screen is to change your Android icons.

In this article, we will see how to change the icons of Android with the famous launcher or how to change icons without launcher, as well as the most popular and best-designed icon packages that can be downloaded for free.

How to change Android icons with launchers

In Google Play, there are thousands of packages of icons for Android, both free and paid, that can be used in most of the launcher to change the style of the home screen.

Thanks to the Android launcher we can choose to change the default interface by changing icons, transition effects when switching from one screen to another, change the screen grids and set up how many icons we want to fill in the blanks and many other aspects based on to the type of launcher we are going to install.

The first step will be to make sure you have a  launcher compatible with custom icons. In Google Play there are many applications of this type, although the most recommended and popular are the following:

After deciding on one of these  applications that allow you to use the icon packages on Android, it’s time to  download one of the packages via Google Play, which we will apply later by following these steps:

Now, when you return to the home screen, you’ll see how all the mobile icons have been changed with the new theme you just installed.

Of course, in some cases, it is possible that your intention is not to change all the icons on the home screen.

Fortunately, most packages offer alternative icons, with different aspects that can be applied to the icon of the same application. These are the steps to follow in that case:

How to change Android icons without launcher

As mentioned earlier, if we want to change the icon of an app, we usually need to use a Launcher that allows us to customize the icons of our favorite apps. Fortunately, we now also have a much simpler alternative in the application format, the Awesome Icons app.

The Awesome Icons app allows us to create a custom icon and assign it to an app in the form of a shortcut on the desktop.

In this way, we simply need to replace the old desktop icons with the new ones we create using the numerous icon packages available for this application. 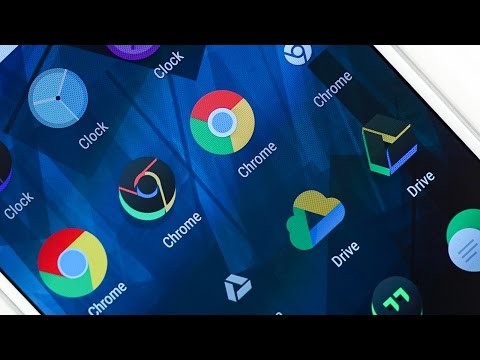 The process of creating a new icon is very simple:

As you can see it is a very simple process that offers many possibilities for customization without having to use the classic launcher. A great tool to customize that will allow us to achieve a greater degree of customization on our Android device.

The best icon packages for Android

Now that you know how to change icons on Android, it’s time to immerse yourself in the thousands of existing icon packs on Google Play and choose which one will be best for your home screen.

While it is very difficult to be with only a few that are better than the rest, we will select those that, in our opinion, are among the best packages of icons for Android that you can download, both free and paid.