It’s been just 25 days since the beginning of 2018, but there are already users wishing to know what will be the Google Pixel 3 and other devices that are scheduled for the second half of the year. This is precisely what has happened with Google Pixel 3 and Concept Creator, the YouTube channel that offers the most renders. These count with a lot of quality and on many occasions they are very similar to the final design. This is why today we present the first render of Google Pixel 3 XL, a device that is expected in early October. Nothing you see here today is official and do not put too much faith in this design since Google could pull on completely different paths.

The render is based on the tastes and beliefs of the designer, something that may change when the presentation date approaches. At the moment we can see the first design idea for a mobile that will be presented in several months. If you like Google phones and want to enjoy Android, this device is one of the most recommended throughout the year.

We can not only see photos since the official render is created in the video. During the more than 2 minutes it lasts, we can see all the angles and details of this device. Possibly the most difficult to believe of this render are the colors, although this designer always uses similar tones to create his designs. Leaving this aside, nothing in the device is disproportionate, and everything is related to the current Pixel 2 XL. In addition to the two materials in the back, it stands out that we do not see a dual camera. 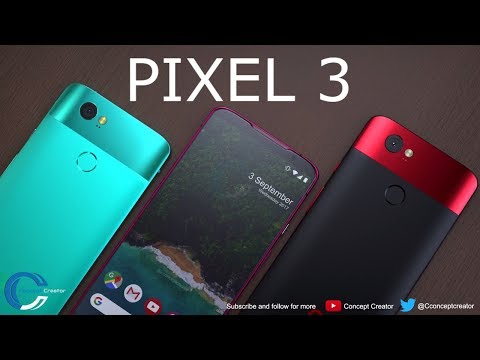 This could end up being this way since Google has shown that a dual sensor is not necessary to get the best photographic section of the market. The screen again is 18 – 9 and does not have any apparent changes to the Google Pixel 2 XL. Where we do see differences is in the section of sound since this render shows a double front speaker. The speakers are placed in the lower and upper bezels in a very interesting and without consuming much space.

All sections seem very careful, but we can not formalize a single detail because Google could radically change the design and leave us with a totally different device. The fingerprint sensor is still in the back, something we have already seen in the two years of the Pixel series.

As a concept, we love it, but we can not assure that this is the final design, not even that there is some relationship. There are still many months to know the Google Pixel 3 and the truth is that this render seems to be based on the developer’s own ideas and not on confidential information that has been achieved.