Hello there! It’s the month of May, June draws near and as usual, we bring it upon ourselves to serve you the TechPill for the month of May as we do every month. May’s TechPill will however be focused on smartwatches; the history, evolution, benefits, functions, and the best smartwatches you can buy in 2021.

Let’s begin… with a couple of questions actually.

Smartwatches have been in existence (but not quite popular) as far back as 1972. The first recognized smartwatch was the “Pulsar”. Pulsar was manufactured by the Hamilton Watch Company in 1972, the came “The Data 2000 watch” by Seiko in 1983, the Timex Datalink Smartwatches by Timex in 1994, the SPH-WP10 (world’s first watch phone) by Samsung in 1999, and the Linux line of smartwatches by Steve Mann in the early 2000. I would love to continue but many more number of smartwatches have been manufactured by several companies. But the ones (smartwatches) mentioned above were the pioneering smartwatches, according to the figures and fact presented by history.

Ever since, the smartwatch scene has witnessed a massive evolutionary upsurge in the acceptance, usage, manufacture, sales, functions and capabilities. And that’s not all, these promises to even get better and better as every minute passes. Think about it, many App developers and companies that have Apps for their brands now design Apps to be solely used on smartwatches. Uber did it; launched a standalone App For Android Wear 2.0 smartwatches. Many other companies will surely follow suit. I’m very positive about that.

Segueing on to the functions of smartwatches, it isn’t one, nor two, neither is it ten. The functions are numerous, and cuts across diverse aspect of human daily living. From telling the time, to playing games, to fitness tracking, heartbeat/heart-rate monitoring, sleep monitoring and to other utilities like thermometer, pedometer, tachymeter and other ‘meters’. Smartwatches, to me, are gradually taking the smartphone place. Though the motion may be slowly and steadily paced, the smartwatch have a 50% chance of taking the smartphone place.

You don’t think that can happen, then I think you should follow me on the journey in the next heading. Come see firsthand, the functions various smartwatch brand can perform and the maybe, then maybe, you would share the same ideology I hold about the smartwatch future. Then, and only then, would you see that it’s truly the time to be smart. The ZTE Quartz smartwatch kicks off our list Best smartwatches of 2017. The device has a 1.4-inch AMOLED screen with an impressive the resolution pegged at 400 x 400 pixels. The AMOLED and resolution combination of the screen makes the ZTE Quartz’s visibility appealing to the eyes when used either indoors or in outdoor environments. And yes, the Corning Gorilla Glass 3 protection on the screen distinct the ZTE Quartz from your regular wristwatch that shatters whenever it goes against the ground.

Speaking what the ZTE Quartz smartwatch can do, they seem to be quite more than just mere time-telling. The 4GB on-board storage gives room for keeping as many multimedia files as it can contain. Likewise the 768MB RAM, it allows smooth multitasking of the numerous in-built applications and the ones you download from the App store. There’s also a speaker on the Quartz for sound output.

All these, the smartwatch functioning, are handled by Qualcomm Snapdragon Wear 2100 chipset and the 500mAh battery.

Talk about smartwatches, and i’ll tell you the Samsung Gear S3 is a big deal. The dial sports a 1.3-inch screen and a rotating bezel around it. The rotating bezel was designed in a manner that its movement/rotation is incorporated with the device function. Spinning the bezel will reveal some updates and notifications. You can also use the bezel to scroll through app icons. The screen on the other hand produces crystal clear and sharp images. The colour reproduction is just superb.

Like the ZTE Quartz, the Samsung Gear S3 also houses a 4GB on-board storage capacity. The Tizen OS on the Samsung Gear S3 is unique to Samsung smartwatches alone, and it is a beautiful OS. Numerous applications, smooth Apple devices integration via Bluetooth are some unique features of the Tizen OS.

The Gear S3 is kept alive by a 380mAh battery that is big and sufficient to keep the smartwatch running for up to 5 days.

Zeblaze is a Chinese company established in the year 2014 that specializes in the production of smartphones and many other smart wearable devices and gadgets. With some smartphones and smartwatches the company’s name already, the Zeblaze THOR 3G Smartwatch with a large 1.4-inches super AMOLED, huge 16GB storage capacity will be the main point of focus here.

The Zeblaze THOR is a special kind of smartwatch. As a matter of fact, I see it to be a smartphone; a special breed of a smartwatch it is. It has a wide 1.4-inch AMOLED touchscreen display that is protected by Corning Gorilla Glass technology.

The design is also spectacularly unique, minimalistic and beautiful. In our review of this smartwatch, we made it known that the THOR smartwatch has a smooth rubber strap finely engineered onto the body frame made from 316L stainless steel. This rubber strap comes in various colour options and has 2 holes pierced in 9 different rows (18 holes in total) for breathable space to prevent sweating.

Other unique selling points of the 6.3 grams Zeblaze THOR smartwatch include the 2MP camera (capable of 5MP interpolation) located at the right side of the watch (just beneath the hard button), nano SIM card slot located at the back of the smartwatch, the fast MediaTek MTK6580 Quad core processor​ that runs at a 1.2GHz clock speed, and the on-board 1GB RAM.

In addition, the Zeblaze THOR smartwatch runs on Android Lollipop OS version 5.1 and is powered by a 350mAh battery pack that drives the THOR smartwatch through 2 days of normal watch usage, 1 day of 3G internet usage and more than 10 hours of music play.

One particularly interesting capability of the Zeblaze THOR smartwatch that I find most captivating is that the ability to hold more than 3000 songs and over 6000 pictures! Thanks to its 16GB on-board storage space.

And here’s another smartwatch from China. This one is called the Huami Amazfit smartwatch all the way from the stables of one of top China’s OEM, Xiaomi.

A 1.3-inch touchscreen display forms the dial of the smartwatch and as seen on the image above, the Xiaomi Huami Amzfit screen/dial has a special type of coating that provides it with anti-fingerprint, and water resistance abilities. The screen which has a 300×300 pixel resolution is also germ-proof. Does that sound possible? I really do not know. And to be honest, I’m really curious as to how Xiaomi made the Huami Amazfit smartwatch resistant to germs.

Looking the Amazfit smartwatch closely, one would want to predict that it is a fitness/sport inclined smartwatch. And it is. The Amazfit has a built in GPS module that receives GPS signal, Heart rate monitor and it can also record sport trail, distance, steps, altitude and other sporty functions.

No.1 is a gradually transcending into a household name in the smartwatch world and one of their smartwatch makes it on our list of Best smartwatches of 2017. With previous smartwatches like the No.1 F2 smartwatch, No.1 isn’t showing any signs of slowing down any soon. Now on to the No.1 D7 smartwatch.

Design-wise, the No.1 D7 smartwatch holds a striking resemblance with the Samsung Gear S3. Likewise the 1.3-inch display screen. To a layman who isn’t smartwatch savvy, pointing out the difference between these two smartwatches may take a while. One major differentiating feature is the absence of ‘rotating bezel’ on the No.1 D7. The bezel is static; firmly attached and glued to the metal body of the watch.

The No.1 D7 smartwatch comes form the factory with a fine black leather strap; another differentiating feature from the Samsung Gear S3 that comes with a rubber strap.

The No.1 D7 smartwatch is powered by a Mediatek MTK6572 CPU with which you can can make calls, download apps, browse the internet. The 1GB RAM allow smooth usage of the smartwatch by allowing fluid running of apps. There’s also a large internal storage space of 8 GB to store your media files like music, videos and other documents.

The No.1 D7 connects to your smartphones via the latest Bluetooth 4.0 and supports 2G, WCDMA 3G. There’s also a massive 500mAh battery on the device. Other features of the No.1 D7 smartwatch include a browser app, weather app, heart rate monitor, compass, pedometer, sleep monitor, calendar, and sound recorder.

You can watch the review video of the No.1 D7 smartwatch below. 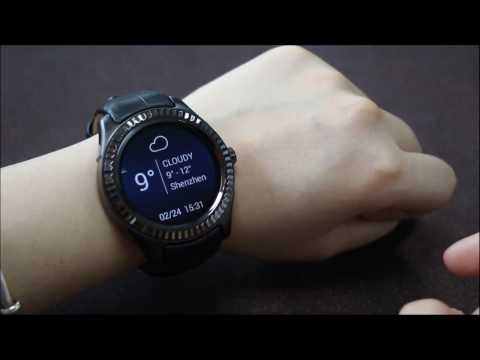 Up next and last smartwatch on our Best Smartwatch of 2017 list is the king of smartwatches itself – the Apple Watch Series 2. Yeah, we just decided to save the best for the last.

What does ​it take to be called King? Sometimes you have to be part of a royal family, or atimes, be the best at what you do. For the Apple Watch Series 2, both scenarios make it King!

Aside​ the lovely aesthetics of the Apple Watch Series 2, the functionality, the processor, the display quality of screen, the responsiveness, the fitness trackers and monitors and so much more characteristics are stand-out features of the Watch Series 2.

The Apple Watch Series 2 has a 1.65-inch AMOLED capacitive touchscreen (the biggest on any smartwatch) finely embedded onto its stainless steel body. The Series 2 also comes in Aluminum body for preference purposes. Irrespective of the body type you opt to go for, the Series 2 still weighs 52.4grams and the body (minus the strap) has a 42.5 x 36.4 x 11.4 mm ( or 1.67 x 1.43 x 0.45 inch) dimension.

The Apple Watch Series 2 has loads of in-built applications (more than you can ever get on any other smartwatch) and there’s even room to download more. Some of the basic apps include Workout, Activity, Mail, Messages, Stopwatch, Photos, Weather, Music, Stocks, Clock, Remote (for controlling iTunes), Maps and Calendar etc.

The ceramic back of the Series 2 watch has monitors and trackers that performs numerous health, sport and fitness purposes; which includes Activity tracking, Running tracker, Heart rate performance, Swimming monitor etc. Did I mention that the Apple Watch Series 2 is waterproof up to 50 meters? I didn’t, but it is waterproof in up to 50m of water body. That pretty much amazing if you asked me. And deep too!

That’s where we wrap it up people. The Best Smartwatches of 2017. These smartwatches made it to the list because they possess great features and specs that smartwatches produced in previous years did not have. These gadgets are turning the smartwatch game around, getting us excited as to what to expect in the future.

Is there a particular smartwatch that you think is worth mentioning but wasn’t? Why don’t you tell us in the comment box. We would definitely love to have a look at it.