Apple is expected to launch three new iPhone variants by the end of this year. This is a cheap 6.1-inch model with an LCD display that will replace the iPhone 8; of the successor to the iPhone X which will feature an OLED display; and finally, the most powerful of the three, which is the variant of the iPhone X Plus with a 6.5-inch OLED display. According to rumors emerged in recent times, it seems that the Cupertino giant is planning to launch the three new variants of the iPhone as part of its annual update coming in September 2018. On the web, there is a lot of information, not always clear, but a new report with images and video seems to confirm the entries. A video published by tipster Shai Mizrachi, shared by 9to5Mac, shows two of the three iPhone models expected from the Apple line 2018, namely the supposed iPhone 9 and the iPhone X Plus. Also, always in the video, it emerges as the cover of the models are the work of the Sketch accessories manufacturer. Usually, the cover makers have a lot of details available before the launch of the phones, so soon we will certainly have some news. 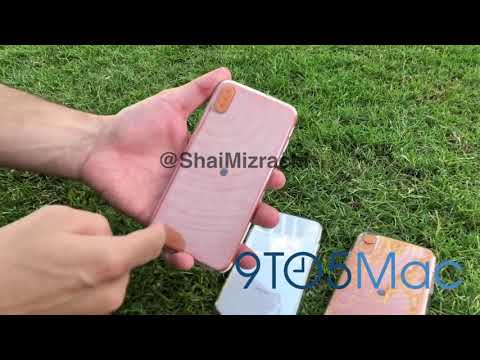 Meanwhile, the 6.1-inch iPhone, which will presumably be the iPhone 9, could be the entry-level variant of Apple. This mid-low-end iPhone will come with an LCD panel and could be priced between $ 600 and $ 700. Last month, a video was shown online showing the 3D prototypes of the iPhone 2018 models, including the 6.1-inch variant. In that video, the three models were compared with different models of the iPhone of the previous generation.

As for the photo sector, nothing certain has yet emerged, but there should not be too many changes compared to what has already transpired. Shai Mizrachi also spoke of “another surprise”, without specifying what it will be.